So this is your plan, Shine? 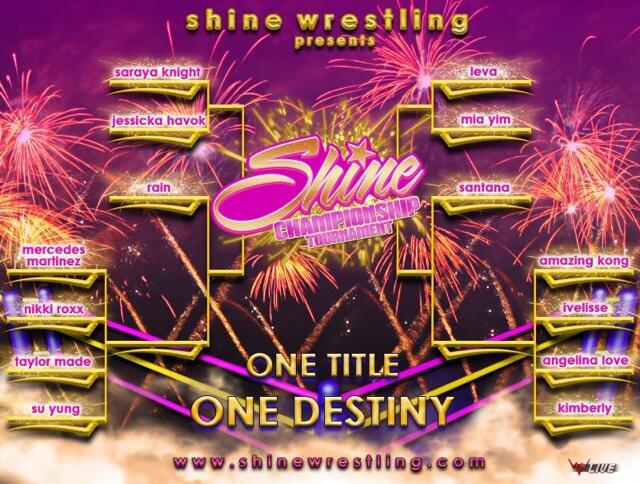 This is your grand plan, Shine Wrestling? Thats fine. Its what I do. Last month, Valkyrie had a plan. I just did what I do best - I took their plan & turned it on itself. So Shine bring me as many obstacles as you can, I'll be ready. This is our 1 yr anniversary & i plan on making it spectacular & will win that belt. Video to follow soon…

Hello, my name is Slacker

I keep saying I need a web master or bribe Jonathan to do my site for me, but this has yet to happen as you can see thus! I believe my last update was in early Oct of last year!! I just honestly dont have the extra time to do this! But here I am working on this somewhat update.

SO MUCH AS HAPPENED SINCE THEN! Triumphant victories; crushing defeats; seeing new places and old friends; and my tag partner, my hetero-lifemate, Allison Danger, retired.

Most of the buzz that was around me this 1st half of the year was my work in Shine Wrestling.  The feud with Kimberly ended up going to a level I never fully expected. Anger, hate & violence all were brought to the surface. I was in types of matches I have never had the chance to do before, limits were tested and I found sides of me I never knew existed.  I always knew I had more in me than a girl with a costume and some jokes. I think I finally had the chance to show it.  There can not be light without darkness...

The rest of 2013, honestly, has been amazing too! Had some really awesome matches & got to travel around. Met Crazy Mary Dobson and loved our match in Indiana for D1W.  Struck gold in Shimmer with Miss Natural as Spock.  Stood next to Danger all the way to her final match. It was a tremendous honor to be by her side in Shimmer and this journey! Met Jessicka Havok in the ring twice and loved every second of it since my last post. And I am in the next round for the tournament to crown the 1st Shine Championship.  I know I am forgetting so much..like wresttling my sis, Kellie Skater; facing the Femme Fatale champ(at the time), Kalamity, welcoming Serena Deeb back to Shimmer in NJ; wrestling as Gandalf and rolling saves to see if Sienna Duvall can get out of my submissions; fighting zombies with Jessica James and so much more!

The next few things on my plate: Queen of Queens tournament for ACW in TX.; & the rest of the tournament at Shine 11, which is also the 1 yr anniversary for Shine

I am pretty awesome at keeping everyone update via social media: Twitter: wrestlingleva; Instagram: wrestlingleva & FB: Leva Bates (official FB page)  Keep up with those for the most up to date info on me!!!  Thanks for all your patience!

Promo for WSU's Full Steam Ahead

September has come and gone. And with its departure has left several incredible memories in its wake! I wrestled for an incredible cause, Hope for a Single Mom, in the fight against breast cancer. I faced off with Kimberly and came out on top!

I debuted and was victorious at Indygurlz in Booton, NJ, against Kimber Lee. The people, the girls, the place and the fans were so incredibly warm and friendly! I debuted my Rambo costume; I even checked a bag of weapons just for this show! Never know what im packing...

After Indygurlz, I came back home and faced Kimberly on familar stomping grounds for Shine Wrestling. Showing that I was willing to fight anything, dead or alive; I donned my brand new Rick Grimes costume and did what I had to do... win. I arrested Kimberly and laid her out with a superkick. Not bad for a day's work as a sheriff from KY! The next day I faced Santana for the SCW Women's Championship! I think my short comings were a direct result of Mrs Orlando"s involvement of the match. But I looked rather dapper in my Joker attire!

I had to face Santana again in Jacksonville for USWA. Our ride ended up having some problems including exploding tires!

Some other craziness happened this month; I promise to touch on other things when the time is right...

Thanks for taking the quick trip of Sept with me! Be sure to follow me on twitter, Instagram and tout: wrestlingleva on all of the accounts. As well as my fb fanpage! That link is on my homepage!

Now I must get ready for October!! I face Kalamity for WSU. And it was JUST announced that I am taking on Jessicka Havok for Shine 4. Which I know will be nothing short of monumental! Following that Regeneration X goes for gold against the Canadian Ninjas!

Fasten your seatbelts and place your trays in an upright position, cuz im taking off! Til next time!!!

Qwest did a show to raise money for Hope for a Single Mom, a breast cancer charity. I wrestled Kimberly in a hard-hitting and fun match

Hey, Leva, Its pretty much fall. Wanna update this site?

So its been forever since I have updated this site.  I'm working on correcting that as I type this.  Please bear with me; technology and I sometimes headbutt each other. I blame my mutant powers! It all started with that cursed treadmill. Anyways, I digress.

I add new pics on the front page; I added a link to my youtube channel; attempted to add my upcoming dates for my shows (though they are not showing atm).

Here are some quick links to recent podcasts, radio shows, promos and other craziness!

I hope that catches you all up!

Finally an update since 2012 rang in!

Sorry for the lack of updates, but I am using the free version of this website and ran out of room.  I plan on purchasing a bigger package, but with the holidays, move and getting ready for costumes for upcoming shows, funds have ran a bit short.  But enough about that; the good stuff!

I got some BIG stuff brewing; I cant wait to go into detail!! Also Regeneration X is working hard on our upcoming projects and surprises! SO MUCH TO COME!

from menu of Shimmer vol 42!

Also from last Shimmer thanks to Gilda Pasquil:

Oh yeah if you havent heard, Im the current CCW women's champ! And I think that catches us up!! ^_^

May the Force Be With You

This last Saturday Nov 26th at QWEST Pro in Orlando, FL, Princess Leva & her Rebels face off w/ the Darque Karnival. Winner chooses a recruit from the other team. In a dasterly turn of events, Leva's Rebels were cheated out of victory and Leva was recruited to the Karnival. After refusing to join the Dark Side, Leva storms out w/ R2 only to be greeted by a familar guest...

Super big thanks to 501st Legion for all the people, costumes, props and fun!  You guys are amazing!!

Here is the link to my interview with TTW Radio from last week: http://t.co/2Z0EToaU

This past Sunday in a town near Fort Lauderdale called Lighthouse Pointe I won the CCW's Women's Championship against Jessika Haze even with the guest ref, Santana G, not counting to three.  Cheaters never win and I proved that by taking home the gold!

This coming Saturday, Nov 26th, I will be wrestling at QWEST Pro.  There are a lot of cool things in store for this show! I promise you that you will see an epic event that you have never seen before at a wrestling show... Intrigued yet?  FL Armory 2809 Fern Creek Ave, Orlando! A local show!!!! Doors open @ 6:30pm.

The latest issue of Honour magazine features yours truly and Allison Danger in nerdy talk, as well as thoughts and shared experiences in the ring. One you definitely don't wanna miss!!! http://t.co/RcNUexRa
October 27th, 2011   |   Permalink   |

Its the Halloween season! My costumes are a Scream

Here are a some of my past slasher costumes

Some pics from Shimmer

Limited Edition shirts are SOLD OUT!!

I wanna thank everybody who bought the limited edition tees this time at Shimmer! We are sold out!  I am currently designing a new shirt right now! I will keep you all updated

I will have brand new limited-edition t shirts designed by the amazing artist, Raven Jericho! These will be 1st available at Shimmer! Super Limited number available! Get them while they are hot!!!! Click here to pre-order! to be picked up at Shimmer!!! Make sure you are already signed into paypal before you click on my link.  Only way I can get it to work. Thanks I will need to know what size you are ordering and which day you will pick it up at Shimmer!!

I am on the Women of Wrestling Podcast with Ringbelles.com!!  BAZINGA! http://t.co/iDwtQghv